Classical guitarist extraordinaire Milica Ilic returns to Perth for the second time during her visit from the UK. She is joined by violinist Paul Wright, Professor at the University of Western Australia, who not only features on all of Milica's albums, but is also a feature violinist of the Kashtany Duo.

Enjoy a night of technical amazement, entertainment and laughter as Milica and Paul present their favourites. 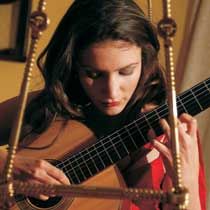 Upcoming international Guitar superstar, Milica Ilic has returned from the UK to Australia for a nationwide tour, coinciding with the release of her latest CD STIR THE SKY.  This CD is released under the Twighlight Classics label and is distributed in Australia by Move Records and online by www.buywell.com.  See below for Audio Samples and a link to a video interview as well as full tour details.

You can hear a live Broadcast from Melbourne’s Iwaki Auditorium on the ABC program The Music Deli on June 14th.

Milica’s CDs are now available from JB HiFi and ABC shops as well as classical specialists.

MILICA ILIC is a classical guitarist who plays a living music that's vibrant, colourful, impassioned and her own. In 2002, when she was just 20 years old, Milica's dazzling musicality and alluring stage presence led to an invitation from the great tenor José Carreras to participate in his birthday celebration concert at Angkor Wat temple in Cambodia. Her performance on that occasion, as on many others since then, was warmly received and critically acclaimed.

Milica is a skilled interpreter of the standard classical repertoire, yet from an early age she has understood that technique is far more than merely a means to replicate familiar material. For Milica technique is a key that unlocks expression, connecting the performance of music to our shared and varied life of sensations and emotions, to memories and aspirations. Now in her mid-twenties she already has a wealth of vivid experience to draw upon in her creative life. From that springs music that's fiery and beautiful, tender, uplifting and intimate.

STIR THE SKY, Milica's new CD, distributed in Australia by Move Records, is in essence an autobiographical statement. Like her debut release, Rouge Guitar, it marks a stage in an ongoing journey that has led her from Bosnia, where she spent her childhood, to Australia, where she grew up and studied guitar, to London, the current home for her music.

STIR THE SKY, mostly featuring Milica's own compositions, is pervaded with a sense of places visited and people met, a sense of movement and music-making. There's also love, laughter, fond memories and bittersweet recollection. Each track is like a journal extract, a highly personal record being offered for sharing.

Milica has toured extensively in Australia, Asia and Europe. In 2005 she performed at international guitar festivals in Darwin, Ullapool, Kirkmichael and Ards. She also featured as special guest at a festival in Windsor, UK, hosted by Tommy Emmanuel, Australia's premier guitarist. In 2003 she took up an invitation to perform as guest soloist at 'An Unforgettable Evening - José Carreras in Concert' in Perth, Western Australia. The previous year Milica had accompanied José Carreras in Singapore, as well as at Angkor Wat, and was a featured soloist with the Singapore Symphony Orchestra.

Milica will tour Australia begining on June 8 - details below 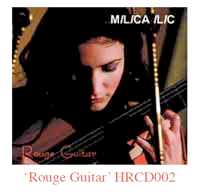