Sybil in a Suitcase

THE Blue Room's Festive Silly Season will light up the Northbridge stage from next week with six original productions by local writers, directors and performers.
One of the acts starting on October 22 is Sybil in a Suitcase, a theatre production strongly drawing on the cabaret form and based on the character of Sybil , a totally modern woman even though she has been around for centuries.
After bonking the god Apoolo in exchange for everlasting life, Sybil is doomed to tread the boards of Tine's stage, hovering around history's hotspots "like a gambler at a losing table," says writer and director Francis Italiano.
“It's now the 21st C and Sybil is feeling a little worse for wear. When we meet her she is on a cabaret stage - or is it the Perth lock-up for being drunk and disorderly?"
Through the performances of co-writer Michelle Hovane playing Sybil and her companion played by Nela Trifkovic (who also composed all the music for the production) the audience travels with Sybil to the Paris Commune of 1871, the siege of Leningrad and to a party with Fidel Castro and Che Guevera in Cuba in 1951.
The production is very much a collaboration between the trio of Hovane, Trifkovic and Italiano.
"When we all came together we felt the time was right for a little political comment," Italiano told the Voice.
"It's political in the tradition of European cabaret, in that it's politically informed humour, not just senseless humour," Trifkovic said.
"All the places Sybil finds herself in the production embody the themes of revolt, resistance and survival and the importance of lifting your voice, which we thought were quite relevant for our time," Hovane said. 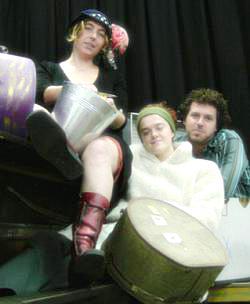