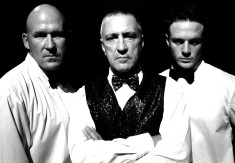 Perth film producer Derek Hobbs is delighted at signing major talent John Waters as the star of his latest movie The Bouncer.

“The script was written with John in mind as the lead, so to have him on board is wonderful” said Hobbs.

“I sent the script to John and he loved it. He agreed to take the lead role after I visited him at his home in Sydney. I couldn’t have hoped for a better result,” Hobbs said.

Waters is in Perth at the moment starring in his John Lennon show The Glass Onion. He has taken time out to start rehearsals with Derek and cast and will return for shooting of The Bouncer in October this year.

“What attracted me to this project was the high quality of the script,” said Waters, “It’s a genre that appeals to me – a comedy-drama about the seedy side of life – the underbelly of life inhabited by interesting people.

“It’s as if the lead role of Dave, the ageing nightclub bouncer was written for me – and that’s very attractive. It’s also very attractive that this is a totally independent movie and though it will have to fight for commercial success on its own terms, it means we don’t have to hand over control to overseas producers. That appeals to me – we can make the movie as it was written”.

The Bouncer’s Utopia Nightclub will be set at the Bog nightclub in Northbridge owned by entrepreneur and film producer Nunzio La Bianca for whom Derek shot and edited the movie Aussie Park Boys which has just taken out Best Action Feature Film at the New York Independent film festival.

“Aussie Park Boys was made on what would be considered a shoestring budget by the movie industry,” said Hobbs, “And at this stage, The Bouncer will also be low-budget although the State Government’s film funding body Screen West has been watching with interest. Filming will go ahead regardless with many of Perth’s best actors and technicians investing their time in the production”.

The Bouncer is Hobbs’ most challenging project to date. He served his apprenticeship as an Army PR and combat photographer and cinematographer. He was a press photographer at the The West Australian for seven years where he won Photographer of the Year. He pioneered Night News cameraman service for Perth television networks where night news events are covered throughout the night and has produced many television documentaries like Aussie Cops, Perth Uncovered and Volunteers.