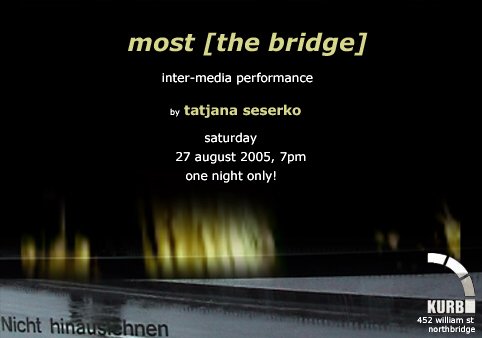 “Language is not a medium for transmitting information, but a mechanism for producing order.”1 (Bjelic, D. I. 2002)

“Most” is an intermedia performance and an extension of performance “Katedrala” that took place in May 2005. “Katedrala” was comprised out of two intervals, where I corresponded with two artists who instructed me over the telephone from two different locations (Zurich, Switzerland, and Melbourne, Australia). Martin Heine was scheduled to answer the phone in Zurich at 7pm (Perth time) on Monday May 23, 2005. Nela Trifkovic was scheduled to correspond from Melbourne at the same time on Thursday May 26, 2005. While riding their local public transport at the time of the phone call, Heine and Trifkovic had six printed images before them. The images were prints obtained from six randomly selected slides from my early childhood in Yugoslavia. The images were outdated, slightly scratched, and blurry. While describing the details of the given images via telephone, Heine and Trifkovic were being filmed by an accompanying person. Simultaneously, at the gallery space in Perth, I painted blindfolded onto the six sequenced canvases.

“Katedrala,” explored synchronicity between action, the blindfolded painting process, and language manifested through telecommunicative directives. Performative events that manifested simultaneously in two different locations, Perth – Melbourne, and Perth – Zurich were explored through multiplicity and assemblage. The outcome of the performance resulted in the movements of disorientation within the space. The synchronicity between changing of the projected images and painting of the designated sequenced canvases gradually collapsed.

The assemblages of segments, driven through changes, in “Katedrala” initiated my intention to create the next temporal event, “Most.” The assemblages of “Most” will be measured by action and time corresponding to the projection of documented telecommunicative directives of correspondents obtained from remote performances of “Katedrala.”

“Most,” a word which in Serbo-Croatian language stands for “bridge,” signifies communication and transmission of information cross-culturally. The documentation of transmission of the interpreted site specifics determined by the spatial positioning of the correspondents provides an objective form of analysis of each particular place. Each locational interpretation generates the associative analysis that entails historical and current geo-political confluence of each site.

Ivo Andric, a Yugoslav novelist and poet, utilised metaphor of the “bridge” as a paradoxically connecting and dividing edifice between places and as a commentary on the historical events informed by colonisation and its resulting exodus in the areas of former Yugoslavia. The signification of “bridge” in this sense becomes transposed to the geo-political and social positioning of former Yugoslavia as a bridge between East and West, between diverse religions, and between multiplicities of racisms. The recent bombings of the former Yugoslavia resulted in destruction of the bridges in the metropolitan areas. This action became symbolic of the break-down of communication.

In my performance, I have taken the symbol of the bridge to the gradual collapsing of the synchronicity of communication between simultaneous performances, between the language, and substance, authority and action, between the ephemeral nature of projected material and the materialising process of painting as a response to the audible and projected data, between subjective associations and objective descriptions.

I would like to acknowledge and express my gratitude to the following persons, without whom the manifestation of this project would not be possible:

I would also like to thank the following for their support and assistance in “Katedrala” and “Most [The Bridge]”:

1Bjelic, D. “Blowing up the bridge,” in D.I. Bjelic and O. Savic, eds., Balkan as a Metaphor: Between Globalisation and Fragmentation, Cambridge, Massachusetts, MIT Press, 2002, p.16.

Most (The Bridge) inter-media performance by Tatjana Šešerko

Press play and wait for movie to load