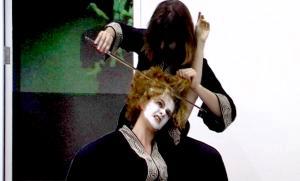 SEIZE ME BY THE HAIR OF FORGETTING

by Tatjana Seserko-Ostrogonac and Nela Trifkovic 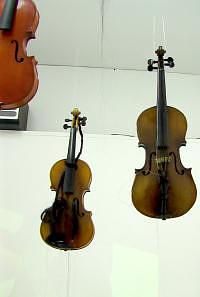 Artist statement for the installation/performance work

Collecting old string instruments (violins, violas and cellos) and re-stringing them with human hair symbolizes the rituals of honouring the past through on-going processes of story telling and re-awakening of memory.

Violin, the most charming of the story-tellers from the family of string instruments lives a double life both as the “queen of instruments” (as frequently described in some European cultures) in Western Art Music and a mystical fortune teller in ethnic and particularly Gypsy folk music.

In the Western Art Tradition it symbolises grace and elegance, yet her alter ego in form of an olive- skinned fortune teller is not so classically beautiful or elegant, but is still difficult to define and impossible to resist trough its gutsy charm and explosive delicacy.

In former Yugoslavia (where both Tatjana and I come from), like in many other Eastern and Southern European countries in particular, this “queen of instruments” has gone even further to become the queen of the people and the human spirit. The folk music players of our childhood experiences seize the instrument in ecstasy, ripping the bow hairs and breaking the strings, just like lovers seize one another in passion and struggle to forget the softness of the loved one’s hair when the love is over…

The hair-strung violins, the developed musical piece, the contrastingly painted faces and the ritual of playing the human instrument and seizing the other (person) by the hair as if it was the instrumental strings and playing it with a bow are all our attempts to discuss and ponder upon the dichotomies, the thin-lines and secret passages between love and fear, remembering and forgetting (or at least attempting to) and reality and memory as a vehicle of shaping, colouring and deepening one’s own reality.

With all its bumps and bruises, dark and light faces, slick and shaggy heads of hair, the players and the played ones   “Seize Me By the Hair of Forgetting” is a hymn to both the concert hall and the street life virtuosic Paganines and a court dance for the immaculate and the rugged queens…

And you want us to love one another

You can shape me from my ashes

From the debris of my guffawing

From my leftover tedium

You can seize me by the hair of forgetting

Embrace my night in an empty shirt

Well you don’t know how to love

(English translation of the text by Vasko Popa as used in the performance, recording and heard on the video of the work ) 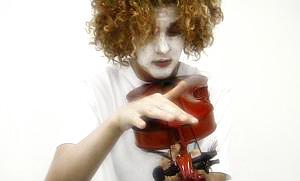 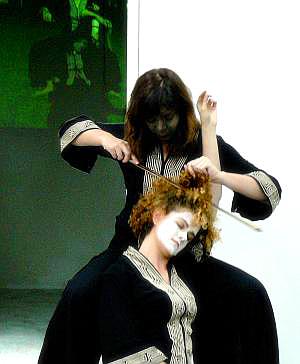 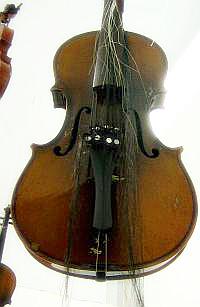