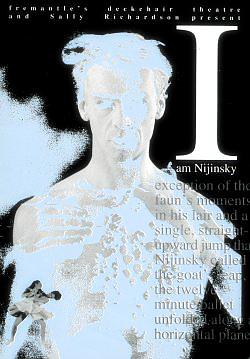 I Am Nijinsky
written and directed
by Sally Richardson 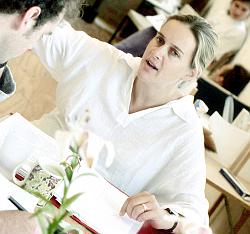 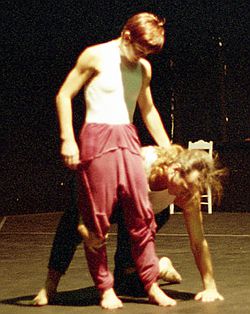 .... GLIMPSES of Nijinsky's most famous performances can be seen in Susan Peacock's choreography.
There is the puppet Petrouchka, the faun from L'Apres Midi, and the raw animal magnetism of Sacre du Printemps.
All these are exquisitely performed by Karlsson and Helgeby.
The program gives no clues as to Helgeby's character but I assumed she was part of the spirit of Nijinsky — maybe, at times, his conscience or his imagination.
Claire Jones (wife Romola) and Boris Radmilovich (impresario and lover, Diaghilev) complete a strong cast and also double as minor characters ...

(SKILLS OF THE DANCE HOLD TRUE, Review by ALISON FARMER) 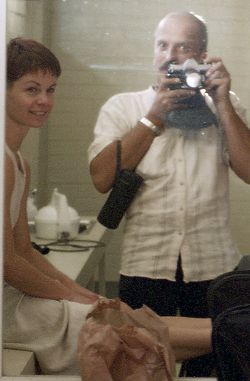 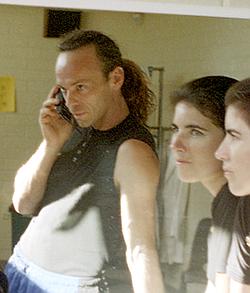 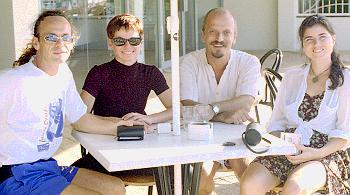 dance
I Am Nijinsky
Perth Institute of Contemporary Arts

It is a tribute to the power of this new production that a packed audience stayed its 75-minute course as the recent weather converted PICA's theatre into a sweltering, suffocating hot-box on the opening night of I Am Nijinsky.

It is one of the most gripping evenings of dance theatre imaginable. The contributions of the 12 different artists responsible for this exploration of the tragic Russian dancer's life are seamlessly meshed; Stefan Karlsson's fractured, complex portrayal of Nijinsky - entwined with his own reality as a dancer - is deeply moving.We are first introduced to Karlsson on a television screen in the foyer, speaking directly to camera and explaining why he himself became a performer. Once in the auditorium, we find him dancing with his projected shadow, accompanied by a spirit in the supple, beguiling form of Margrete Helgeby. Their flickering silhouettes immediately establish the elusive nature of the man, his muse and his art.

The entrance of the brilliant, manipulative impresario Sergei Diaghilev (a telling performance by Boris Radmilovich) marks the beginning of the Nijinsky story as interpreted by this creative team. During a short, charged encounter, ending in a sexual embrace, we begin to understand why the dancer's career was so dominated by this fabled producer and how the end of their relationship meant the effective end of Nijinsky's stardom - and of his sanity.

But writer-director Sally Richardson has so sensitively and clearly delineated the main events and personalities in Nijinsky's troubled life that viewers who know nothing of his biography will
effortlessly follow what is a haunting tale.

Perhaps the most imaginative use of Graeme MacLeod's video input is the scene in which Nijinsky - now crippled by the mental illness which will imprison him, from the age of 27, for the rest of his life - struggles to perform what will be his final solo for a Red Cross benefit in Switzerland. during World War 1.

As he sits immobile, unable to draw movement from his tormented body, a projection of a tiny Nijinsky dancing with his spirit/muse plays over his still figure. It's as if we are looking into the artist's soul, sharing his desperate need to create. And when he finally erupts into a passionate, monumental "dance against death," we are the more shaken for knowing the terrible effort this solo has cost.

One of the most intriguing aspects of Nijinsky's life was his sudden, inexplicable marriage to a Hungarian groupie he scarcely knew, Romola de Pulszky. This strange union ended his relationship with his lover Diaghilev but cast him once more in the role of a puppet, controlled by a forceful if adoring partner.

Claire Jones is entirely persuasive as Romola (so too as a dance critic, early on in the production) and we follow her misguided and increasingly desperate efforts to find a cure for her catatonic husband, by now the father of their two daughters. The disastrous effect of the electric shock and chemical treatments is implied in conversations with several psychiatrists (effectively played by Radmilovich) - but there can be no clear explanation of the enigma that was Nijinsky.

All this is played out within Gary Chard's elegantly spare white setting,
with interesting musical links to the familiar classical scores composed by Sarah de Jung, Adrian Sterritt's lighting is subtle and apt.

As the production ended, to thunderous if sweaty applause, a large moth swooped through the spot lights. Nijinsky's spirit in attendance?

So this compelling work is a must-see; but do keep a watchful eye on the weather forecast and book for a cool evening. Fortunately, the season continues at PICA until February 1, so there are lots of opportunities - and these are extended to four metropolitan regions, following soon after the Perth run.